To help investors looking for a system to track the relative attractiveness of the U.S. equity market, the Financial Relativity Index has been created based on a set of leading indicators derived from the research contained in the book, Theory of Financial Relativity.  The index is a heuristic used to gauge the relative attractiveness of investing in stocks at a given time based on the interaction of major market forces and the resulting impact on the rate of change in the price levels of stocks (DOW Signal), money (Interest Rate Spreads) and energy (Oil).  All of the signals in the multivariate model possess characteristics which have a high probability of being exhibited prior to a sustained equity market downturn accompanied by economic recession; and likewise remain within certain parameters when the equity market is more attractive as an investment such as during a post recession rebound or an economic expansion.

The status of the Theory of Financial Relativity leading equity market indicators as of 2/28/2014 is show in the table below. 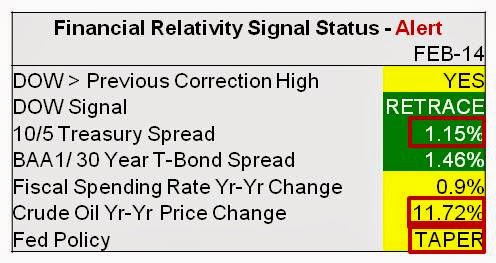 At the end of February, the major US stock market indexes (DIA) (SPY) were increasingly becoming less attractive investment alternatives.  The trend in the market signals were pointing to potential market instability
progressing into the spring of 2014 due to the unsustainable basis for the market valuation and increasing international unrest.  This assessment is based on ample evidence that the primary basis for holding the record stock index highs at the end of February was a Fed driven shortage of US dollar investment alternatives.  With the advent of much higher international tension, the US equity market was precariously perched for a downturn if the economic war between east and west escalated.

Due to continued historically high levels of quantitative easing by the U.S. Federal Reserve, the Financial Relativity Index signals were not yet indicating an imminent large scale market breakdown.  Fixed income safe investment alternatives were in short supply and additionally most Treasuries were providing negative inflation adjusted returns.  This market environment was not conducive to creating a sustainable run on stocks.  However, the oil market, and the heavily correlated gold market were both severely undervalued relative to dollar based equity and fixed income investments.  International tensions driven by Russia’s aggressive acts of war in the Ukraine buoyed increased buying activity in these markets, triggering a higher cautionary alert by the leading indicators for equity investors.

The strength in the oil and gold markets relative to USD based Treasuries and equities were a direct indication of growing dollar based weakness as the international events in the Ukraine were unfolding.  In addition, the safe haven Treasury trade became more pronounced as capital began to flee to Treasuries of all maturities driving down rates across the board.  Should the tensions of potential war in the Ukraine continue without immediate resolution, the threat of a sustained U.S. equity market breakdown will rise.

Historically when the market is ripe to roll-over, research shows that it is almost always driven by a disruption from an international source which forces the Federal Reserve to respond with tighter credit conditions to maintain the value of the U.S. dollar.  The most reliable signal of deteriorating conditions that instigate Fed intervention is the oil market because it clearly shows the relative strength of the non-western alliance currencies to the USD.  As of the end of February 2014, because of the weak U.S. economy, the magnitude of an oil spike required to precipitate a market downturn may not be as large as in the past.  Typically a run up of 50% to 100% is required.  Based on the relatively high valuation of the market at the present time, any sustained run in oil prices at the previous all-time high in the range of $140 a barrel for WTI should be viewed as a very unwelcome sign for investors with over-exposure to U.S. equities.

Daniel Moore is the author of the book Theory of Financial Relativity: Unlocking Market Mysteries that will Make You a Better Investor.  All opinions and analyses shared in this article are expressly his own, and intended for information purposes only and not advice to buy or sell.

Buy a copy today at:
Amazon.com
Barnes&Noble.com
AppleI-Books.com
Posted by Financial Market Vigilante at 7:45 AM