Market Winds are Shifting – Time to Assess the Signals

On Friday, May 2nd the April jobs report was published by the U.S. Bureau of Labor Statistics showing that 288,000 new non-farm payroll jobs were created in the month.  It was the strongest month to month growth since January of 2012.  In addition the unemployment rate fell to 6.3%, with 138.252 million people estimated to be employed during the month.  This is the highest total number of employed people since March of 2008 and is on the verge of becoming an all-time high in terms of total employment.

The information was published a day after both the DOW and S&P500 (DIA) (SPY) set new all-time highs.  The immediate response by the market when the jobs information was released was a jump higher.  However, by mid-day the market was slightly down, seemingly unimpressed by the job figures, and ended the day on a down tick.  Why?  Research has shown that while jobs are of course an important economic indicator, they are always a trailing indicator.  Anyone trading stocks on the jobs report is searching for fool’s gold.  The more important aspect of the jobs report is whether the data causes an unexpected change in the expected direction of market influential factors that do impact stock valuations.
Since stocks, as measured by the S&P 500, have advanced over 30% since the beginning of 2012, undoubtedly many market investors have been anticipating higher economic activity.  Questions remain, however, whether there are more financial gains to be had in the near term, or whether there are better relative options for investing capital at the present time.  For insights into these questions, using the market relevant signals can be very useful in assessing the likely near-term market direction as the winds of change start to blow.

To track the relative attractiveness of the U.S. stock market as an investment, as published in my book Theory of Financial Relativity, I track 7 market signals formulated from the research in the book to gauge current market risk and relative attractiveness as an investment.  The signals are measured as of the end of trading on 4/30/2014 are shown in the following table. 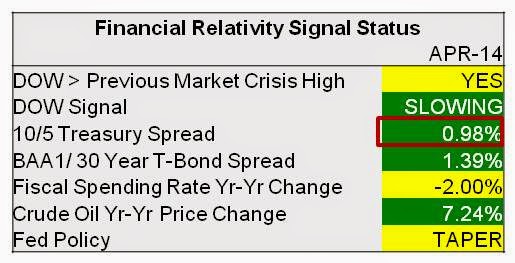 A quick glance at the indicators shows a few precautionary yellow status signals...

Link to Full Article
Posted by Financial Market Vigilante at 7:24 AM