As we approach the 2014 mid-term elections, U.S. fiscal policy is an economic headwind without any apparent current political movement to change.  The relatively tight policy as measured by rate of growth is a counter inflationary force foremost, but also potentially slows down economic growth.  You can see the evidence that the present fiscal policy is currently tight by reviewing the August 2014 year over year fiscal expenditure growth rate compared to previous years when the stock market peaked.

This data is surprising to many investors because they are so accustomed to hearing how Washington is out of control from a spending standpoint.  The data, however, is actually pointing in a different direction presently.
Read more »
Posted by Financial Market Vigilante at 6:56 AM 2 comments:

One aspect of the recent U.S. economic growth not widely recognized is that it is being fueled by renewed high levels of debt being taken on by consumers, businesses and investors.  Unsustainable debt levels are notorious for derailing GDP growth.  This phenomenon was evident prior to the last two stock market peaks, and the risk has returned to the U.S. market once again.


If you review the statistics shown in the table below, you will see that just like 2000 and 2007, debt levels in 2014 have risen to warning zone levels relative to the size of the U.S economy (red = historically high, yellow = approaching historical high levels).

Read more »
Posted by Financial Market Vigilante at 6:48 AM No comments:

Many articles have been released in the media in recent weeks concerning whether the stock market is over-valued or “very expensive” and may be approaching a peak.  One highly regarded researcher is Robert Schiller, who in August of 2014 was interviewed by many media outlets concerning the high level of the CAPE Ratio (cyclically adjusted P/E) to give his views.  Using this analytical approach he notes, “The United States stock market looks very expensive right now.”

I take a slightly different approach to look at the relative value of stocks compared to historical norms, but reach the same conclusion as Dr. Schiller.  The analysis, as summarized in the graph below, simply looks at the ratio of the traded value of the DOW relative to the nominal GDP (stated in billions) during the same time period.  Most recently the U.S. nominal GDP was just over $17.3 Trillion, and the DOW was trading at 17,098 at the end of August giving a ratio of .98. 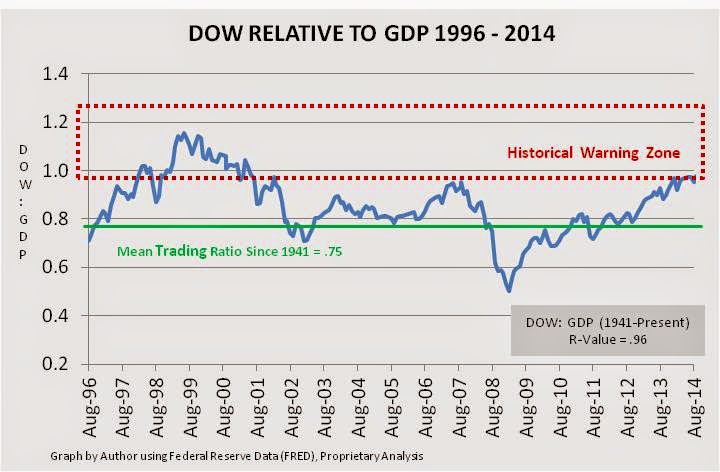 The ratio is functionally useful in highlighting periods when the market is in outlier territory.  Presently, the stock market indices (DIA) (SPY) (QQQ) by relative measure are expensive.  However, history has demonstrated stocks can trade at these levels for extended periods before a steep correction occurs.  Since the 1990s, expensive in relative terms is a necessary but not sufficient reason for a major decline.  Saying stocks are expensive is different from trying to assess whether they are at a peak, and a portfolio adjustment toward higher liquidity and lower risk is a good play.

Read more »
Posted by Financial Market Vigilante at 5:43 AM No comments:

Fed policy continues to be aggressively accommodative going into year-end 2014, even as it is projecting a wind down of the massive $1.54T QE program begun in January of 2013. 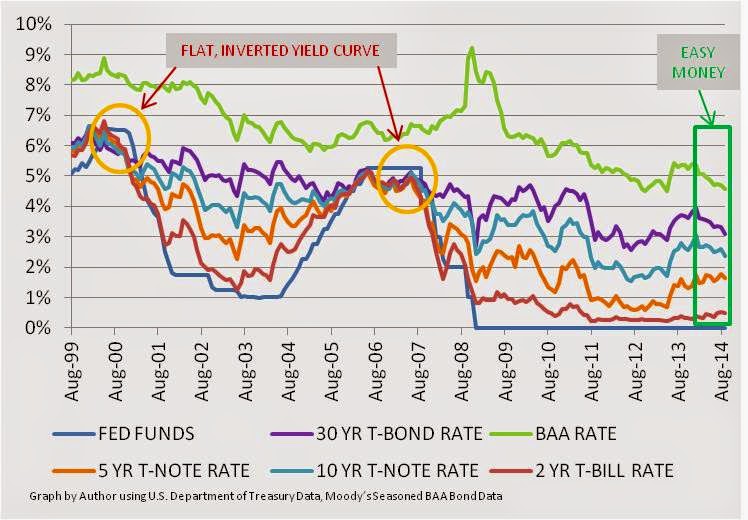 The easiest way to see the market rate impact of the Fed’s QE program and ZIRP (zero interest rate) policy is to review the current Treasury yield curve.  As the above graph shows, the current yield curve is

Read more »
Posted by Financial Market Vigilante at 4:46 AM No comments: