As we approach the 2014 mid-term elections, U.S. fiscal policy is an economic headwind without any apparent current political movement to change.  The relatively tight policy as measured by rate of growth is a counter inflationary force foremost, but also potentially slows down economic growth.  You can see the evidence that the present fiscal policy is currently tight by reviewing the August 2014 year over year fiscal expenditure growth rate compared to previous years when the stock market peaked.

This data is surprising to many investors because they are so accustomed to hearing how Washington is out of control from a spending standpoint.  The data, however, is actually pointing in a different direction presently.


Looking at the growth rate in government spending since WWII provides a more useful relative perspective on the normal mode of government interaction with the U.S. economy.  This data is important because the Federal government is presently spending over $3.9T a year (22.7% of GDP).  Any change in the rate of spending growth has a definite impact on GDP growth. 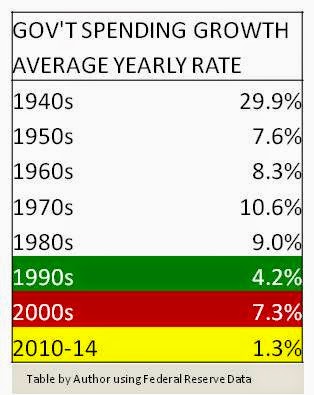 
How can President Obama, the leader of the “tax and spend” party, somehow be in charge of the tightest fiscal budget in terms of growth rate since Harry S Truman in 1946 through 1948?  The data since 2010 show this is true.  But recall that President Obama’s first budget was in 2009.  During that budget, the Congress increased spending by almost $1T a year on a permanent basis, a 35.7% increase, from $2.8T to $3.8T.  Thereafter, rather than growing expenditures, the newly established elevated levels have been maintained with only minor yearly increases.  The money flowed in many different directions, such as the highly advertised increase in food stamp recipients from 25M to almost 50M.  You can decide for yourself the effectiveness of the programs chosen to encourage economic growth.

If the 2009 government spending level increases had continued, in all likelihood the Fed QE program introduced in 2013 would have been a major inflationary disaster.  On what basis do I make this assessment?  If you review the data in 2011 (about 18 months into the implementation of the Obama spending program), inflation growth (3%+)and M2 monetary growth (10%+) were on the cusp of taking off to historical high levels, just like the 1970s.  The fiscal policy restraint put in place in 2011 in response to the mid-term elections appears to have stopped this trend before it got out of control.


Historically, correlation data analysis shows that fast fiscal spending growth, not slow, combined with easy monetary policy is highly correlated with inflation.  Quantitative easing (QE ) by itself does not highly correlate with CPI-inflation; rather it is more prone to cause equity price increases and financial instability.

The upcoming 2014 mid-term election is likely to reinforce (falsely in my opinion) market expectations that the current budget constraints will continue.  The market has become accustomed to low inflation expectations.  The Fed through continuous Congressional testimonies is leading investors to believe that the reason inflation is low is because personal income levels are stagnant.  A more precise explanation is that the hot money the Fed is printing is not finding the pocketbooks of a majority of Americans.

Switch the flow of funds from excess liquidity being channeled into stock buy-backs and tech IPOs, and instead into government entitlement and military spending which flows more directly into average American bank accounts, guess what happens.  Kaboom, the stock market deflates.  Why?  Because the Fed has to stop the process which is currently fueling stock gains at the same time the U.S. government begins to demand an increasing amount of funds in the financial markets.  The bad news is that instead of interest rates falling as they did in a similar fiscal policy scenario post the year 2000 market peak, the next move for rates in the U.S. financial market is up while the stock market goes down.


Are investors once again being bamboozled into risky portfolio positions by the unsavory shenanigans of the U.S. Treasury and Federal Reserve Bank?  I think so.  Destabilizing threats to the current high flying market valuations are presently being ignored in the market as many investors are afraid they are missing out on the gains.  The threats include the need for increased military spending to deal with the uprisings in Iraq and Syria and other mounting hotspots in the world, and more ominously, the entitlement programs which are only at the starting line of ramping up.

Investors need to become very cautious at this stage in selecting investments.  Once the data begin to reflect fiscal spending growth returning with a vengeance after the past 4 year hiatus, the monetary mirage produced by the Federal Reserve massive quantitative easing program of 2013 and 2014 will disappear.  The magnitude of the correction as this shift takes place is unlikely to be small; but as in the time period after the year 2000 peak, may take several years to be fully realized as political maneuvering  attempts to postpone the inevitable.

Readfull article – Think the Market is Peaking? Remember 2000 and 2007

Daniel Moore is the author of the book Theory of Financial Relativity. All opinions and analyses shared in this article are expressly his own, and intended for information purposes only and not advice to buy or sell.
Posted by Financial Market Vigilante at 6:56 AM