The news headlines announced 1Q GDP growth of 0.2% on April 29, 2015.  Anemic would be a compliment.  Why isn’t the U.S. economic engine roaring ahead?  There is a large tailwind of lower energy prices.  The major market stock market indices recently reached new all-time highs (SPY) (DIA) (QQQ).  Apple (AAPL) and Amazon (AMZN) stocks continue to grind to higher and higher plateaus.  Why is the mainstream economy so “disconnected” from the stock market?  And why is the cost of money on government debt so low in the U.S. (0 to .25% on short-term Treasuries) and even negative in the Eurozone.

Larry Summers, Former Secretary of the Treasury for the Clinton Administration and Former Director, National Economic Council for the Obama White House has put forth the economic concept known as “secular stagnation” as a significant factor in the current poor performance in the U.S. economy.  (See article - On secular stagnation: Larry Summers responds to Ben Bernanke)

Secular stagnation is defined as an economic situation created when there is a chronic excess of saving over investment.  The economic prescription proposed when this situation occurs is to expand fiscal policy in general and public investment in particular to promote growth.  Is the chronic saving situation real or is it just a consequence of prior political actions which now need to be corrected?  And if so, how did the U.S. and the world get into this predicament?

Read more »
Posted by Financial Market Vigilante at 11:40 AM No comments:

The trading pattern of the major U.S. stock indices (DIA) (SPY) (QQQ) during since the beginning of 2015 is best described as sideways and volatile. 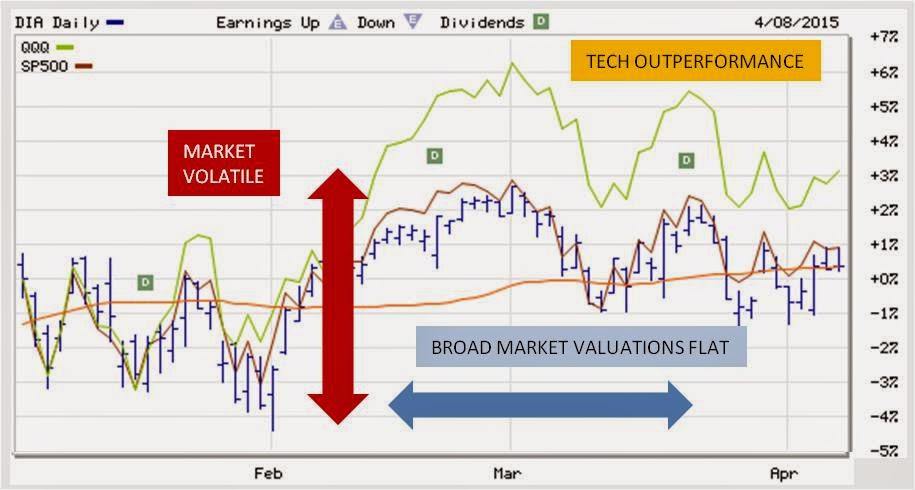 A review of the equity market indices shows the 50 day moving average of DOW and the S&P500 barely maintained a positive slope in the first quarter, while the trading range showed a loss YTD of almost 5% in early February only to recover to a positive 2% by early March, a range of 7%.  The tech heavy NASDAQ was a better performer in the first quarter, providing relative gains of 2% for the 1st quarter, and currently up 3% for the year.  This pattern is indicative of a market in which stock buyers are increasingly wary of the valuations of large capitalization stocks which are expected to suffer earnings hits in the coming quarters because of a strong dollar, while riskier bets on technology that derive benefit from lower overseas cost of goods paid off.

The market dichotomy of technology out-performance while more commodity based industries suffer is not unusual.  There are two instances in recent history where the major market indexes were driving to new highs while commodities, and in particular oil, suffered major corrections - the mid 1980s and the late 1990s.  The actual market characteristics are decidedly different today; for one neither of these last two points in history had a zero-bound interest rate policy at the Fed.  In addition, there is no major technological discontinuity today  such as the analog to digital transformation in the 80’s or the dot.com boom of the late 1990s.  However, the investment pattern is similar.  And the tendency of investors to see relative value in technology over alternatives is evident, not only in the U.S., but also in foreign markets, particularly China (U.S.Dot-Com Bubble Was Nothing Compared to Today’s China Prices – Bloomberg, April7, 2015).

Why are market investors currently bidding up the values of technology firms which are characteristically cash burning bets with a few big hit survivors, versus continuing to plow money into the more conservative stocks?  It is within the context of this market scenario that is beginning to play out in 2015 that investors need to continue to assess the likelihood that the U.S. equity market will “correct” from its lofty relative valuation levels before the new tech bets being placed can pay-off.

Read more>
Posted by Financial Market Vigilante at 5:23 AM No comments:

Zero Interest Rates - A Restrictive Monetary Policy for the Masses

When the zero-bound rate policy was implemented by the Federal Reserve after the 2008 financial crisis, it was readily accepted by investors that the policy was being implemented on the pretense of making monetary policy “easy”.  Six and ½ years into the policy, it is becoming increasingly clear that the interest rate policy is best described as “low”, but the term “accommodating” is not a proper way to described the actual policy which has been implemented.

After studying his very compelling arguments, it is now more apparent than ever that the current Fed zero bound rate policy (ZIRP), particularly given the extended length of time it has been utilized with only marginal results, is targeted to solve economic problems which in isolation the Fed does not appear to be best suited to solve.  The result has been a policy that has morphed into a restrictive monetary policy that is now taxing the mass U.S. market.


Read more »
Posted by Financial Market Vigilante at 10:36 AM No comments: