Zero Interest Rates - A Restrictive Monetary Policy for the Masses

When the zero-bound rate policy was implemented by the Federal Reserve after the 2008 financial crisis, it was readily accepted by investors that the policy was being implemented on the pretense of making monetary policy “easy”.  Six and ½ years into the policy, it is becoming increasingly clear that the interest rate policy is best described as “low”, but the term “accommodating” is not a proper way to described the actual policy which has been implemented.

After studying his very compelling arguments, it is now more apparent than ever that the current Fed zero bound rate policy (ZIRP), particularly given the extended length of time it has been utilized with only marginal results, is targeted to solve economic problems which in isolation the Fed does not appear to be best suited to solve.  The result has been a policy that has morphed into a restrictive monetary policy that is now taxing the mass U.S. market.


The unavoidable fact about the current the Fed zero interest rate policy is that it has not spurred aggressive business investment or consumer borrowing that historically investors expect from accommodative Fed policy.  Several factors explain the difference, including a curtailment in fiscal spending growth and a much more restrictive bank regulatory environment.  In the wake of the 2008 financial crisis the Bernanke Fed was task by Congressional law (Dodd Frank Act) to use a “macro-prudential approach” (a.k.a. capital controls) to handle threats to financial instability.  (Ben Bernanke Blog - Should monetary policy take into account risks to financialstability?)   The result has been a more bureaucratic deployment of capital in the U.S. economy, rather than allowing the free market to allocate capital based on interest rate levels and reserve requirements at financial institutions.  Much of the effort has been done with a stated Obama administration goal of keeping the cost of financing the U.S. National Debt low.

Since the end of 2008, the combination of ZIRP augmented by tight regulations on what banks can and cannot do, has empirically resulted in hoarding of cash reserves by a few large financial players in the financial system.  (See Excess Reserves of Depository Institutions).   Investors looking for inflation from the low interest rate policy have been silenced by the actual result.

The reality from an implementation standpoint is that current Fed policy is a restrictive rather than "accommodating" monetary policy.  This perspective is now supported by real economic data with respect to the actual impact on the average consumer and small businesses since early 2009.  The low rates have not translated to lower rates on consumer or credit card loans; but, the lower rates have translated to lower rates (0%) on consumer savings.   Additionally, lower rates have not translated to substantially lower rates or an expansion of small business loans.  In other words, spreads on Wall Street have expanded or been preserved, and Washington has benefited through lower financing costs on the National Debt.  But the majority of the population has experienced a more restrictive policy (net of a few who may have gained by lower mortgage financing rates, if they could actually get a loan approval). Arguments about a "wealth effect" because of stock market gains again only apply to a small segment of the population.

What is the Biggest Risk to Financial Stability Now?

The artificial market equilibrium shift lower in rates caused by QE has not lead to corresponding sustained level of business investment growth.  As a result, the U.S. financial market now sits on a very weak foundation which can crumble simply by a reversal of the Fed balance sheet. 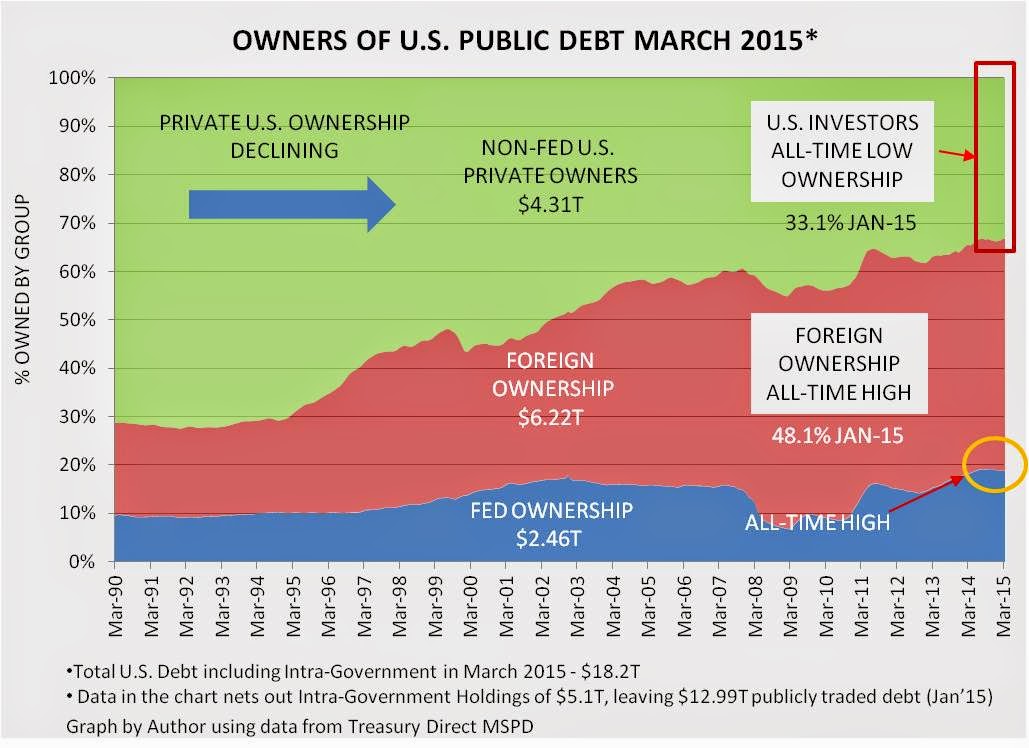 As the above graph visually demonstrates, the biggest financial threat to financial stability may well be the liability side of the U.S. balance sheet – of which the Fed has become a much larger owner recently.  Foreign holdings have increased in percentage terms to all-time highs recently (the foreign balances include both government and multi-national company holdings in overseas custodial accounts).  Ironically, QE was implemented under the pretense of solving a financial instability problem in 2008 and expanded in 2013 to solve an unemployment problem.  Does the Fed have a “macro-prudential” policy to protect the market from the financial instability which its own balance sheet is masking should a change in the flow of funds into U.S. Treasuries happen now?

Fed actions which lead to an erosion of the purchasing power of U.S. consumer savings are restrictive, not expansionary monetary policy when capital controls are implemented which restrict monetary expansion across a large cross-section of the U.S. economy.  This is the policy U.S. investors have lived with for the past 6 ½ years.  It equates to "taxing the masses," which cynically may be the point since no elected official wants the responsibility.  Returning rates for U.S. consumers to money purchasing power equilibrium matching the U.S. inflation rate, rather than trying to advantage certain groups over the mass market through Fed “macro-prudential” policy seems, in my one vote opinion, to be a sounder policy framework.  In fact, it is probably much more likely to produce sustainable U.S. employment growth.

Guiding policy from this perspective would very likely push other elected policymakers to face the economic trade related problems that negate U.S. job growth initiative that are becoming progressively worse because of the manner in which the U.S. debt is financed.  Call the large influx of foreign purchases of U.S. Treasuries a “savings glut” as Ben Bernanke has in a recent blog, or simply foreign country currency manipulation, the facts point to the flow of investment funds into the U.S. Treasury market as being the root cause of a problem which is impeding the U.S. and worldwide interest rate market from returning to historical normal levels

What is the best course of action for your portfolio in the current skewed financial environment?  My opinion is that steady re-balancing of your portfolio is the best “macro-prudential” approach at the present time because as I have pointed out in previous posts, U.S. equity markets are expensive.  The goal in re-balancing should be to create higher and higher liquid, cash equivalent balances prior to the point in time the Fed decides to change its policy based on its interpretation of economic factors, or more likely because it is forced to because political circumstances change.

Investors can hedge this outcome risk by selling (preferably into rallies) small percentages of the over-priced equities or U.S. broad indexes (DIA) (SPY) (QQQ), creating higher cash balances and moving a fraction of the proceeds into sectors that have suffered large declines in the wake of the current Fed policy.  These beaten up sectors all have a common theme –Emerging Market Equity and Debt, Commodities, Oil and Gold.


Daniel Moore is the author of the book Theory of Financial Relativity. All opinions and analyses shared in this article are expressly his own, and intended for information purposes only and not advice to buy or sell.
Posted by Financial Market Vigilante at 10:36 AM