Treasury Rates Up, Stocks Up - Will the Pattern Continue?

Since the U.S. Federal Reserve ceased its quantitative easing program at the end of October 2014, the stock market has been decidedly more volatile, while also in my view, trading in a pattern that is counter intuitive to many investors.  During the QE phase, stocks reacted to the increased market liquidity by catapulting higher, while rates across the board fell.  As rates went down, stocks and asset values in general went up.  The expected inverse relationship of asset values to interest rates held.  The major stock index correlation to the increasing size of the Fed balance sheet is virtually 1 to 1 for the period 2013 through mid 2014.

Take away the Fed supplemental diet of steady doses of new liquidity infusions, and as you might expect, U.S. stock returns have struggled.  However, they have not struggled as much as many investors may have expected.  In fact, just this week in May 2015, the DOW (DIA) and S&P 500 (SPY) traded to new all-time highs.  As new all-time highs have been set in 2015, the number of pundits making their predictions of doom in the market seems to get larger and larger. See article: Stockman: Stocks and bonds will 'crash soon'.

The 2015 contrary pattern of Treasury rates trending higher since a low reached in January and stocks moving to new all-time highs is very interesting.  The more investors worry about the impending doom that the Fed will create by raising short-term rates, or worse drawing down the size of its balance sheet, the more the stock market seems to trade higher.  In fact, as illustrated in the graph below, there is a new pattern to which the market is now trading.

As you can see in the graph, since the beginning of 2015, each stock market interim bottom has corresponded with a short-term bottom in long duration Treasuries.  Each short-term peak has corresponded with a peak in long-term Treasury rates.  The current move up in Treasury long duration rates and corresponding move higher in stock prices has not yet confirmed an interim peak, but my estimate is that the May month end close will likely confirm the next reversal point. 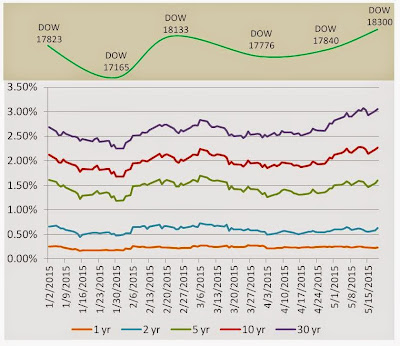 Posted by Financial Market Vigilante at 10:49 AM No comments: