If you currently have positions in U.S. equities, you might be interested in the rare and usually ominous signal that was sent by the DOW (DIA) and S&P500 (SPY) at the close of trading on August 31st in 2015. 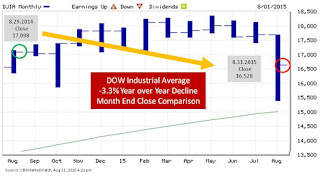 Why is this change in the DOW an important signal for investors to pay attention too?  Because year over year monthly changes in the DOW are rare, particularly when the recent occurrence is after an all-time high was set 3 to 4 months earlier.

What information is the DOW Signal Sending?

Read more>
Posted by Financial Market Vigilante at 6:54 AM No comments: