Market discussion was heated after the December 4, 2015 OPEC meeting about whether the organization was “losing its relevance”.  The argument was that since the price of oil continued to free fall after the meeting because the Saudi led cartel did not scale back production to support the price, that somehow the organization had lost its grip on the world oil market.  The inability of the group to agree on an official quota left organization members producing at a rate of 31.5M BBLs a day.  The result of the meeting was not received well by the market.  Subsequent to the meeting the prices of crude dropped below $35 per barrel for WTI and $40 per barrel for Brent and show little sign of quickly rebounding. 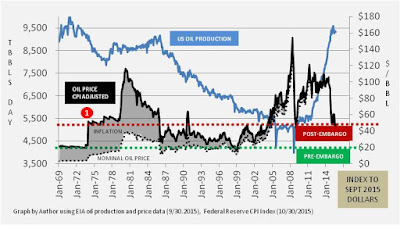 To understand the relevance of OPEC today, I believe you need to review the history of points in time that the price of oil moved significantly, both up and down.  And, since oil is priced in U.S. dollars, the prices need to be normalized for U.S. inflation through time so that changes in the supply of oil relative to demand can be better understood.  With this framework in mind, I went back to the point in history when OPEC was arguably at the peak of its power as an organization, the Arab Oil Embargo, and examined 5 major price discontinuity points since that time.  The results of the research are shared in this article I recently published on Seeking Alpha.

Read more>
Posted by Financial Market Vigilante at 7:02 AM