Oil Prices Bottoming? – What Changes in the Futures Curve Say

The oil futures curve over the past half year, dating from August 2015 to the end of January 2016, has undergone a radical downward move.

In August 2015 the current March contract level was priced at over $48 per barrel. By mid January the contract dipped below $28 per barrel concurrent with the point in time the February contract expired. After expiration, the futures curve rallied over 25%, with the front month contract increasing to about $33 per barrel. The rally overall has been uniform across the entire contract spectrum, with mid-term longer dated contracts faring better. 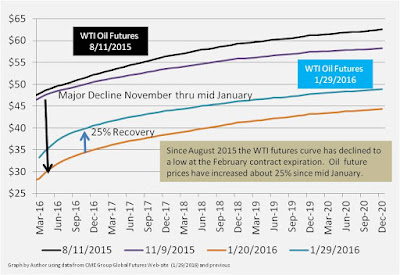 For this price rally to hold, signs should continue to become evident that future supply relative to demand is tightening, forcing the longer dated contracts to become more expensive while the front-end of the curve exhibits volatility as traders maneuver to make money in the process of clearing excess oil in storage

Why the Current Oil Rally has Stronger Legs

More>
Posted by Financial Market Vigilante at 5:17 AM