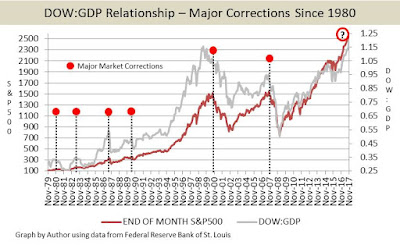 Read more »
Posted by Financial Market Vigilante at 8:48 AM No comments:

The devil is always in the details, and the Republican Tax Cut proposal which was unveiled on Thursday November 2nd has changes buried within it that will affect a broad swath of tax-payers.  A large segment of the mass individual tax-payer population gets a bigger tax bill or nothing.  Using averages to sell the plan to the public is misleading.  I suggest checking how the personal exemption elimination while upping the standard deduction while eliminating many popular deductions affects your particular circumstances.  Many families of 4 who own a home with a high mortgages will lose ground if this plan becomes law.

Meanwhile there is a big reduction proposed for corporate taxes from 35% to 20%.  It appears the plan is constructed to give Apple Inc. (AAPL), and multi-national companies a big pay-off for their prior transfer pricing shenanigans whereby the multinationals set prices of goods, services and intellectual property rights that constantly move between their national business units. In this scheme, which is widely used, a foreign parent (say a Chinese affiliate) charges a U.S. business unit an inflated price for an I-Phone, which allows the U.S. tax bill of Apple to be greatly reduced or potentially even eliminated.

This transfer pricing practice is widely utilized by multi-nationals throughout the world to avoid paying U.S. taxes.  They can avoid the taxes as long as they do not repatriate these inflated profits to the U.S., which is precisely what Apple has been doing for years, particularly since the I-Phone took off in volume about 5 years ago.  Instead of paying their fair share of U.S. taxes, Apple has amassed $268B in cash and marketable securities, the majority of which is held in foreign custodian accounts in U.S. dollars.  (See Apple 10-K here)  This massive figure represents about $800 in cash for every American citizen.

Read more »
Posted by Financial Market Vigilante at 9:33 AM No comments: