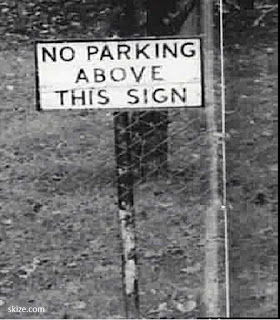 The business media was frenetic on Wednesday (1/10) about a story launched by Bloomberg in the early morning hours that China may slow or even cut-off its purchases of U.S. Treasuries. (Reuters, Bloomberg, CNBC).   The stock market had a knee jerk reaction downward, as the pre-market futures were down and the morning broader market stock trade was off up to -0.49% on the S&P500. 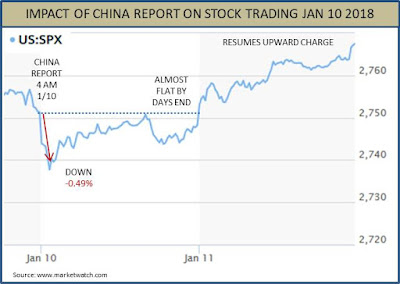 But once the Treasury auction was completed, the broader US equity markets resumed the relentless charge higher, as if the Laws of Financial Physics need not apply to stock investors at the present time.  At some point in time, investors are going to figure out that they are parking money in a zone where the Law of Gravity will eventually apply again.  However, for investors who can’t or don’t read the signs, I suspect the day of reckoning will be a brutal one this time around.

The interesting aspect about this news impact on the market to me is the fact that it is a re-cycle of information that has been known to the market for a long-time.  China has not measurably changed its holdings of U.S. Treasuries since 2011, and at times in the second half of 2016 actually reduced its holdings substantially.

Why did a rumor that the Chinese may not buy as many U.S Treasuries in the future rock the stock markets on Wednesday morning?  The quick answer lies in the impact of the just approved Tax Reform bill which will require an estimated $1.2T in new Treasury debt financing in 2018 alone, and continue to climb thereafter at the new, much higher, rate.  Rationally investors should expect that a country like China, and even Japan which has U.S. Treasury holdings of $1.1B as of October 2017 (See TIC Data), will be less likely to finance U.S. deficits going forward.  The Tax Reform bill is aimed at “Making America Great Again”, per its Presidential sponsor.   And financial flows between the U.S and countries like China and Japan will be impacted by the new law, particularly if it means that the U.S. will become less dependent on their exports.
Those who want to use the tired argument China or Japan or other foreign countries don’t have any choice but to continue to buy U.S. Treasuries, lest they destroy the entire value of their reserve holdings, miss the point.  The Trump Tax Reform plan by design forces repatriation of U.S. dollars to the U.S. initially, so expect foreign holdings to go down in large amounts in the coming months, and then encourages the dollars to continually channel back to into the U.S. rather than remain overseas.  This is because the territorial tax system which reduces the corporate tax rate to 21%, the midpoint of world corporate tax rates,  means the game of stashing USD overseas by multinational companies to avoid the U.S. tax man (Apple Inc. (AAPL) is the poster child)  is not as profitable anymore.  The question outstanding is, where will the money come from to finance the “massive” tax cuts now that the virtuous flow of dollars from overseas is going to be smaller in the future?

Stocks Trading as if Laws of Financial Physics are suspended

In the world of finance, just as physics, every market action has an equal and opposite reaction and the law of gravity applies.  At the present moment, stocks (QQQ) (DIA) (SPY) are racing higher, under the presumption that the laws of financial physics have been suspended with a simple wave of the US Congress wand.  However, the opposite stock market reaction to the Tax Reform bill in the world financial markets will eventually be felt as financial flows of capital shift around the world.  And the market reaction to the “rumor,” some even called it “fake news,” on Wednesday January 10th, 2018 was an important signal to smart investors who actually understand what is really going on in the capital markets.

The bottom line from the Wednesday Jan 10th stock market reaction to the China news in the Treasury market is that the anticipated reaction to the actual implementation of the Tax Reform bill on stocks is a big negative.  Wednesday was only a trial balloon launched by Bloomberg ahead of a large scheduled auction of 10 Year Treasury notes that afternoon.  The market reaction was perfectly in-line with expectations.  The “bond vigilantes” from the Far and Middle East have signaled that they intend to extract higher interest rates as the Tax Reform Bill is implemented.  Once the reality of what will happen as the tax bill is implemented becomes understood by the market – not the rumor of a run-off in overseas demand for U.S. Treasuries, but an actual decline in demand just at the point in time Treasury supply must increase, U.S. Treasury interest rates are likely to go up “big league” style.

In fact, as stocks have raced higher, the impact of Tax Reform on the credit market has not yet even started in any measurable way.  The U.S. Treasury debt blimp has been circling Washington waiting clearance to land once the 2018 budget is approved by Congress and the U.S. debt ceiling is lifted again.  Financial gravity has been temporarily suspended by the Washington bureaucracy.

Since December 8, 2017 the U.S. Treasury has been severely limited in their ability to access the public debt market with net new issuance because the $20.45T National Debt ceiling was breeched, and the budget resolution to raise it was deferred until mid-January.   The Treasury is using extraordinary measures to avoid hitting the debt ceiling currently, such as stopping investment into two retirement funds for federal employees.

However, interest rates have still been trending higher.  In recent history, when the U.S. Treasury hit the debt ceiling limit and curtailed new public debt offerings (not to be confused with re-financing existing debt), Treasuries have tended to decline – particularly longer duration Treasuries.  However, since mid-December 2017, contrary to recent history the yield curve is now showing upward pressure building across the board. 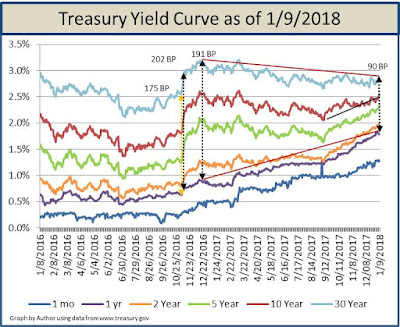 And, most importantly for stocks, the 10 Year has started to trend higher.  This pattern confirms the trend begun in September of 2017, as it stands in contrast to the decline in rates in the first half of 2016.  During early 2016, the U.S. Treasury was in a unique period in which additional borrowing was not required.  In fact, only $488B in new money was raised by the Treasury in Fiscal year 2018, and most of that money was raised at the end of 2016.  However, the Treasury needs over $1.2T in new financing in the year of 2018, and its coffers are drying up quickly since the National debt ceiling was reached on December 8th, 2017, and the Tax Reform bill passed in December, greatly curtail tax collection prospects for 2018 and beyond.

In my assessment, the Tax Reform bill passed in December 2017 will mark a watershed turning point for the Treasury bull market of the last 30 years.  Coincidentally, the last tax reform bill passed was in 1986, just over 30 years ago.

Since Trump was elected in November of 2018 the Treasury yield curve as measured by the 2 YR to 30 YR spread has flattened from 202 basis points just after the election, to a low of 83 basis points on January 4, 2018.  Since January 4th, the yield curve has widened to 90 basis points.  Many investors currently believe that stocks will continue to trade higher until the yield curve inverts.   I point out the major risk in this “rule of thumb” investing approach at the present time in a recent article Myth: Stocks Never Peak Until Yield Curve Inverts.   In the near future interest rates are very likely to head higher on both the short and long end of the curve.

Tax Reform Not Yet Priced Into Stocks?  You have to be Joking.

Saying that stocks have extremely high momentum at the present time would be an understatement.  The pattern is reminiscent of many blow-off market tops in the past like 1999-2000 and 1987.  The most telling qualitative measure to me that investors need to head to the sidelines is that you have pretty much 100% agreement among mega asset managers (at least in public interviews) that U.S. tax cuts have added fuel to the stock market rally and that there is more room to run.

For instance, BlackRock CEO Larry Fink said in a CNBC interview on January 12, 2018: “This market run-up is a recalibration of how corporate earnings are going to be [post tax reform].  And you’re going to adjust now the stock price to the new EPS (earnings per share) level.”

According to Fink, now that Tax Reform has passed, the market needs to re-calibrate the market value on top of an already over-priced market.  The Laws of Financial Physics need not be applied to the current market pricing bonanza; simply hit the buy button and your money will be safe.  Remember folks, “pigs always get slaughtered”.  And, I might add, there are clever money managers on Wall Street who enjoy being the butchers.

For those who don’t care to review the data or don’t have access to the same information as Fink, the Tax Reform bill and its potential impact on GDP and corporate earnings are diversions from the real financial game being played now that it has been passed by Congress.   That game has now turned to chasing Treasury yields higher without breaking the market so that money managers can unload over-valued positions and find shelter in higher yielding U.S. Treasuries, lest they lose all the bogus bitcoin-like paper gains they have yet to book.   You are very likely to hear that rising rates are good, because they are a reflection of a growing economy - not a market reaction to money being passed out to corporations in the form of a tax break that must be financed.

However, there is one gigantic problem.  The financial market, due to Fed and Central bank largesse and corporate stock buy-backs, has re-calibrated upward on top of an already over-valued stock market and without any regard to the coming “equal and opposite debt market reaction” .   Once the Fed gets its Treasury dump-a-thon up to full speed, other Central Banks around the world begin to follow, and the U.S. Treasury starts to borrow to finance the “massive tax-cuts”, to use Trump’s words, the stock market will systematically re-calibrate in the opposite direction.

When this pent-up financial re-action is finally cut loose on the world financial markets, my advice is you do not want to be long many stocks, or long credit duration either.  Until that time, have fun playing the market.  But, be weary that risk happens very fast when stocks become as over extended as they are at the present time.

If you are interested in a market signal that will probably hit a boiling point right before “she blows”, read the following article Stocks Beware, 10-Year Treasury Dancing With Oil Again.  In this article I explain a very useful market signal that is currently moving in the wrong direction, the correlation between the 10 Year yield and the oil spot market.  Based on the current trajectory of this signal, stocks are definitely on the warning track for a major reckoning day.  Once the correlation between these markets hits the red zone, I suspect major money managers will have already pushed their book into a net short position, leaving the IRA and pension holders across America to socialize the losses.

Daniel Moore is the author of the book Theoryof Financial Relativity.  All opinions and analyses shared in this article are expressly his own, and intended for information purposes only and not advice to buy or sell.
Posted by Financial Market Vigilante at 8:55 AM