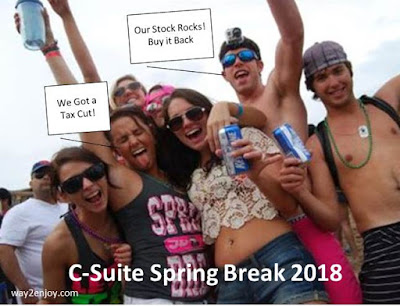 Spring break is an annual ritual for many in college.  A time for carefree abandonment where you are sure you are invincible and the crowd is your biggest ally.  And when I think about what is going on in the stock market as 2018 spring break approaches, I cannot help but imagine a large band of C-Suite Executives leading the party this year.  With the Tax Bill passed last December, corporate pockets are flush with extra cash, and they are just looking for a way to spend it.  According to President Trump, they are going to do the responsible thing - they will invest it in plant and equipment and create American jobs and the economy will flourish.

But Spring Break has never been about doing the responsible thing.  It is more about doing the irresponsible, and pushing it to the limits.  And in the year of freebies being released from Washington in the hope of responsible behavior, there is this Pollyannaish notion that the adults in the C-Suite will do the right thing.  Well optimism would be well founded if you believe that doing the right thing is taking the tax-cut windfall and continuing the trend of buying back your own company stock. 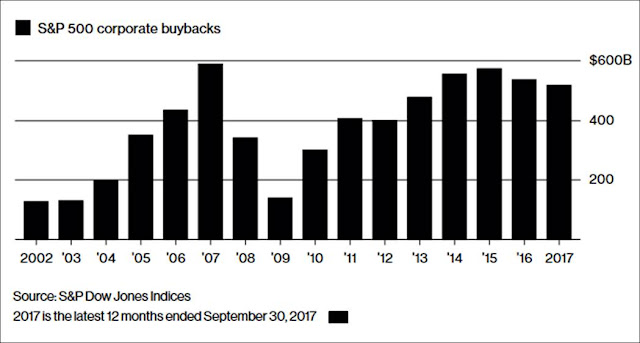 According to Bloomberg Intelligence, corporate buybacks are likely to jump 75% to $850B in 2018 after the passage of the Tax Reform Bill.  This would not only continue an already hot trend, but accelerate the activity to a new level well beyond the high reached in 2007.  And, in case you missed it, 2008 and 2009 came after 2007.

I am not talking about stock buy-backs in general.  I fully understand the dynamic of buying shares back in order to compensate for stock option dilution.  I also understand that in certain cases a one-time stock buy-back program is better than a cash dividend for shareholder tax considerations.

But recently the Wall Street financial engineering gimmick has risen to a level where “gone wild” is the appropriate terminology, and therefore the activity needs to be called into question for what it is in excess form, a big consumption party.   And the consumption is at the expense of capital formation in the U.S. economy, and standard of living for many who are not as well connected to the C-Suites as others.
Do not think that the current C-Suite behavior is fundamentally endorsed by major business school classroom teaching, although I hesitate to comment on the motivation of the endowment arms of the same programs.   What the textbook says about corporate stock buy-backs is beware because although they can lead to a sugar high for the stock over the short-term, if the behavior is out-of-control it will inevitably lead to lower quality of earnings, placing the remaining shareholders left in the “boat” at risk of sinking when the next financial storm hits.  The book also says that the management team of companies sponsoring excessive buy-backs should be closely examined because in many, many cases it shows an active admission that they either don’t have growth projects available to invest the money that they are draining from the swamp.   Or, worse, they have been too lazy or unable to do the job they have been given to grow the company, so they have chosen to take the low road.

I graduated in the top of my MBA class at Duke in 1988, in the same program as Tim Cook, CEO, Apple Inc. (AAPL)  Apple over the last several years has increased its stock buy-back program substantially.  Thanks to a windfall in profits from the smart-phone product success across the country and the world, as well as the off-shoring of manufacturing and clever tax avoidance schemes, Apple Inc. is flush with a massive cash stockpile.  I get it. The company needs to return the profits to its shareholders.
But, just like IBM, which has for years leveraged itself and reduced the quality of its earnings through stock buybacks, Apple is now beginning to reach the point where current buyback behavior may be at the expense of future results.  Its borrowing level against its cash level has reached higher and higher levels over the past several years as the company had to borrow funds in order to buy-back its own stock while it kept its overseas cash stashed in Treasury securities and corporate bonds so that it could continue to dodge the IRS.  With the Tax Reform bill, a lot of these prior actions will be netted out as the overseas cash is repatriated, and what investors may be surprised to see are a much lower cash balance than before, and a much weaker balance sheet.
There are many tech companies which have been using this same formula over the past several years like Microsoft (MSFT) and Oracle (ORCL) to name a few.  The main point for investors is that excessive, leveraged corporate buy-backs usually are not a good long-term investment opportunity (although they are often good short–term momentum plays).  And in many cases, they have become an on-going means for C-Suite executives to line their own pockets at the expense of the long-term health of the business.

There is a simple chart I can point to which shows how the chronic buy-back behavior by corporations over the past 20 years is symptomatic of real capital formation destruction in the US. 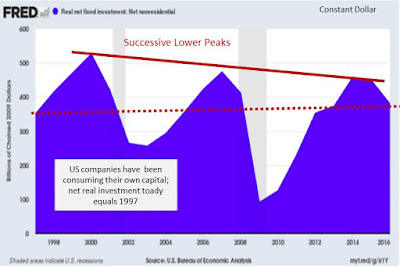 In a nutshell, US corporations have been steadily eating the seeds that are needed to keep the apple orchard strong and flourishing in the future.   Unfortunately the losers in this perpetually downward sloping line dance are the very taxpayers who are expected to pay for the tax cut recently bestowed upon corporations who are going to use a large part of the money to buy-back even more of their shares.   I have seen bad deals for US taxpayers in the past, but this one has the potential to be an a real loser.

If you want good evidence of just how addicted many of the C-Suite Executives are to the stock buy-back juice to keep their stock price inflated, look at the corporate buy-back activity at Goldman Sachs during the first week of February 2018 as the stock market corrected 10%. 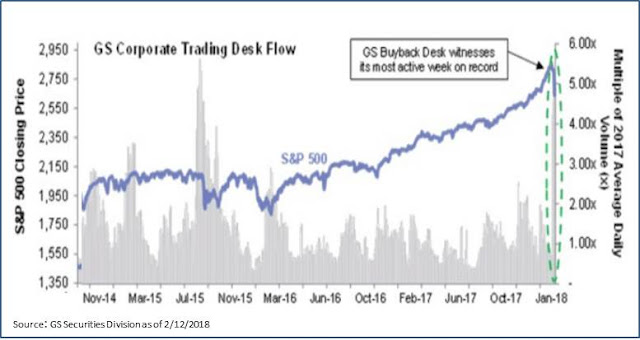 As the chart says, corporate buyback activity was the highest on record.  Flush with cash from the Trump Tax Reform bill, the first knee-jerk reaction of the C-Suite when their stock began to deflate from bubble territory was to use the windfall to buy-back even more shares at inflated prices.  The Spring-Break invincible mentality prevailed.  Correcting the long-term capital formation problem is not high on the list, if it is even on the list, for most C-Suite executives.  The C-Suite incentive is to continue the stock price escalation party at whatever the cost, and share buy-backs are the order of the day as evidence by the early February 2018 trading volume.

This behavior is not unexpected.  Goldman Sachs prior to the Tax Reform Bill passage forecast that this would be the case in October 2017. 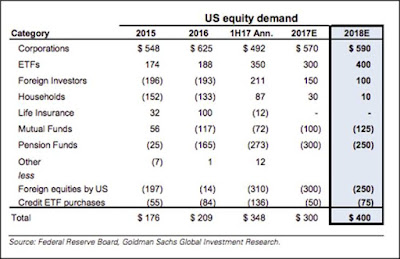 What I find most interesting about the bottom-up forecast by Goldman is that corporate buy-backs in 2018 are expected to deliver 1.5 times the total net expected demand for US equities!  (Take $590B/$400B)  Think about that for a moment.  The only way that the total stock market can reach a higher plateau is if US corporations shrink their way to prosperity.

This is not what I consider a healthy stock market, nor one that is on a path on a broad market basis to sustain the current valuation levels, even though it has been happening on a continual basis year over year, just because Washington has sent out a rescue Hail Mary tax cut after years of Central Bank asset purchase programs.  Where I beg to differ with the Goldman forecast for increased equity demand in 2018 is that the Tax Cut has to be financed by the US government (thank you American tax payers).  A headwind in the credit market is about to blow-thru the financial market in ways that many do not anticipate, nor do they want to admit.  One way will be less foreign investment demand as the dollar weakens.  Another is that higher rates and increased supply will cause investment demand to migrate away from equities, particularly by low risk (volatility) investors.  The correction in early February was just the tip of the iceberg in this transitional swing.

But the real headwind for stocks, and the ability of C-Suite Boardrooms to continue to approve the excessively reckless behavior, is likely to be the drain on corporate operating cash flow that is permeating through many companies at the present time.  Take a look at this chart courtesy of SG Cross Asset Research. 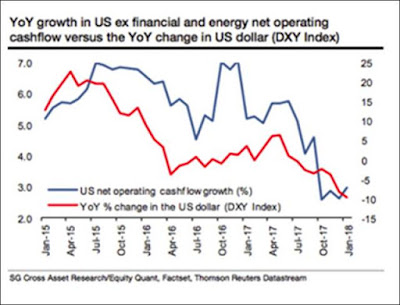 What this chart makes painfully clear is that the operating cash flow of US companies is currently on the decline, moving below 3% YoY as we head into 2018.  One of the big factors in the decline has been a weakening dollar, which will be particularly stressful on many companies in the tech sector.  The energy sector, on the other hand, will reap benefits, but at the expense of consumers seeing higher energy bills.  All of this will be happening as the cost of money is rising.  And as interest costs rise, leverage costs at these companies will increase.  The operating cash flow is about to come under even more stress at many firms that have borrowed more and more money to stay on the buy-back treadmill over the past 30 years.

Methinks the party may be about to end, not begin.  As much as there are people who want to believe that a tax cut on corporations will pass through to the bottom line and therefore stocks are a buy, the real broad market demand for many stocks is incestuous, coming from the very company which issued the stock in the first place.  In other words, companies are eating their own seed corn.  Washington just giving the companies extra money by lowering their taxes, which leads to a weaker dollar and higher interest rates for everyone else, does not equate to a root cause fix of the problem.  That problem has been 30 years in the making.  It will not be solved overnight.  And continued desperation buy-back maneuvers by the C-Suite is not going remedy the problem.  In fact, it is more likely just to make the morning after headache even more painful.

Daniel Moore is the author of the book Theory of Financial Relativity.  All opinions and analyses shared in this article are expressly his own, and intended for information purposes only and not advice to buy or sell.
Posted by Financial Market Vigilante at 9:31 AM