Careful Buying the Dip after the Correction, You May Become the Moth to the Flame 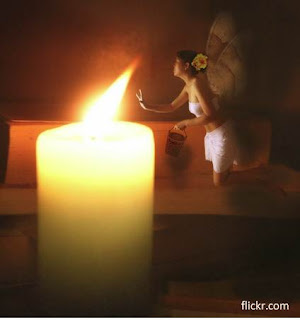 In my latest financial market perspective article, Warning: Market Rout In Progress, Investor Discretion Advised, written on Thursday, February 8th after the stock market closed in ‘official down 10% correction territory’, I stated a view that the market would now be tested and a sell any rally (SAFR) rather than buy the dip (BTFD) psychology was likely to emerge.  The biggest challenge in the market in holding the recently achieved highs is that the broad stock market valuation has been driven well beyond its supportable valuation range given the size of the US economy and its current growth capability.

The main reason that stocks have been able to move up to the high point it reached it reached on January 26th, 26,617 on the DJIA (DIA) and 2873 on the S&P500 (SPY), is the combination of extraordinary world central bank monetary stimulus over the past 9 years combined with the tremendous hype behind a new US government economic plan. 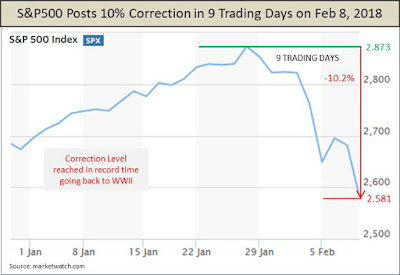 The extremely fast move in the market into correction territory the first week of February is a sobering reminder to investors that there are pent-up speculative pressures embedded in the market that will need to be unwound as monetary stimulus is unwound.  This process is very likely not over after just 9 trading days.

The primary change in the market that is causing the market to show signs of breaking down after almost 9 straight years of upward ascent is the shift in Washington DC.  Going forward for the indefinite future, monetary policy is no longer going to be the primary engine driving the economic sleigh.  The signing of the Budget C.R. into law on February 8th 2018 by President Trump locked in place a fiscal budget which will run much larger deficits over the next decade, while the Federal Reserve is beginning to execute a plan to reduce the amount of Treasury (IEI) (TLT) and MBS securities it holds on its balance sheet.  Both of these moves are simultaneously adding supply of US debt onto the public market, and having the effect of causing interest rates to rise much faster than many investors have anticipated.  As I have noted in separate article posts, the Financial Market Jury Is Out On The Trump Economic Plan.

Regardless of whether you believe the Trump economic plan is going to be good for US economic growth or bad, the real issue for investors is how the consequences of the plan are going to affect relative investment asset valuations.

And the bottom line from my assessment is that the US spent the last 10 years on a path mortgaging its future economic growth thru artificially low interest rates enabled by the Federal Reserve and Central Bank monetary policy throughout the world.  A return to a more ‘normal’ regime in which fiscal policy is the main government based economic stimulus means higher interest rates, and therefore a systemic pricing out of the financial mirage in the markets must take place before the market can fairly value the effect of the fiscal policy change.  Throughout 2017 and into January 2018, the stock market was fundamentally mispricing risk as it catapulted to ever higher all-time highs.  The mispricing happened because the market was under the influence of a monetary policy that could not, and will not be maintained.  In other words, the market was pricing in totally false hope.

So what should investors do now that the market warning shot has been fired, and the government policy shift from monetary to fiscal is now moving forward?

My own strategy is to sell high and put more money into short-term cash and near cash securities as an insurance policy against the unforeseen consequences that lie ahead.  Currently the stock market is at very high risk of experiencing a bear market correction (20% plus downward move) in 2018, without an actual recession being experienced in the economy.   The last time this happened was 1987.   A market sell-off of this magnitude is required just to remove the monetary stimulus mirage that exists in the market now.    The signal that I use to warn of the impending downturn over the next 0-8 months reversed from an all-time high point at yearend 2017.  You can review the information is the article Warning: GDP Matters Too Much To Stocks Currently.

If the current financial market turmoil is supplemented with an economic recession within the next year, then the total market drop will be much deeper than presently expected by the market.  Currently the hope by government policy makers is that the large fiscal stimuli being thrown at the economy this year will off-set going cold-turkey on the monetary addiction problem.   I will be monitoring the follow-on impacts of the shift from a monetary to fiscal driven economic policy closely for signs of economic slowdown as 2018 proceeds.

Because the balance of risks are heavily tilted in favor of further market declines in my assessment, selling market rallies until a clear bottom is formed is the best investment strategy going forward.   It turns out that if you track the advice of several Goldman Sachs (GS) top equity strategists leading up to the recent market top and following correction, you are now probably drawing a similar conclusion.

Pre-Correction Goldman says not advisable to sell stocks, in other words, buy any dip

“It doesn't make that much sense to try to identify the absolute peak of the market, partly because if you sell a little bit early then you are usually in the same position as someone who waits for a bear market to start." (CNBC interview, chief global equity strategist Peter Oppenheimer, October 12, 2017)

“When you get a bear market it doesn't start with a huge collapse in one direction. You tend to get a lot of volatility around the peak. And nearly always a correction is followed by a very sharp bounce so typically you get another chance to reassess."  (CNBC interview, chief global equity strategist Peter Oppenheimer, October 12, 2017)

“Bottom line, we haven’t reached the short-term bottom, but you’ll know it when you see it (or at least 5 minutes later!). But longer-term, I do believe this is a genuine regime change, one where you sell-the-rallies rather than buy-the-dips.” (E-mail to “big” clients from Goldman’s Brian Levine. co-head of global equities trading, Friday, February 9)

Entire email text:  Goldman Writes A Letter To Clients: ‘I Believe You Sell-The-Rallies Rather Than Buy-The-Dips’

The bottom line is that if you cannot sleep well at night because your portfolio is likely to lose a lot of value as rates rise, then stock market rallies in the near and intermediate term will be good chance to re-balance your risk.    It is very likely you will not be alone as many investors realize that buying the dip in the current market is like a moth being drawn to the flame.

Daniel Moore is the author of the book Theory of Financial Relativity.  All opinions and analyses shared in this article are expressly his own, and intended for information purposes only and not advice to buy or sell.
Posted by Financial Market Vigilante at 9:14 AM